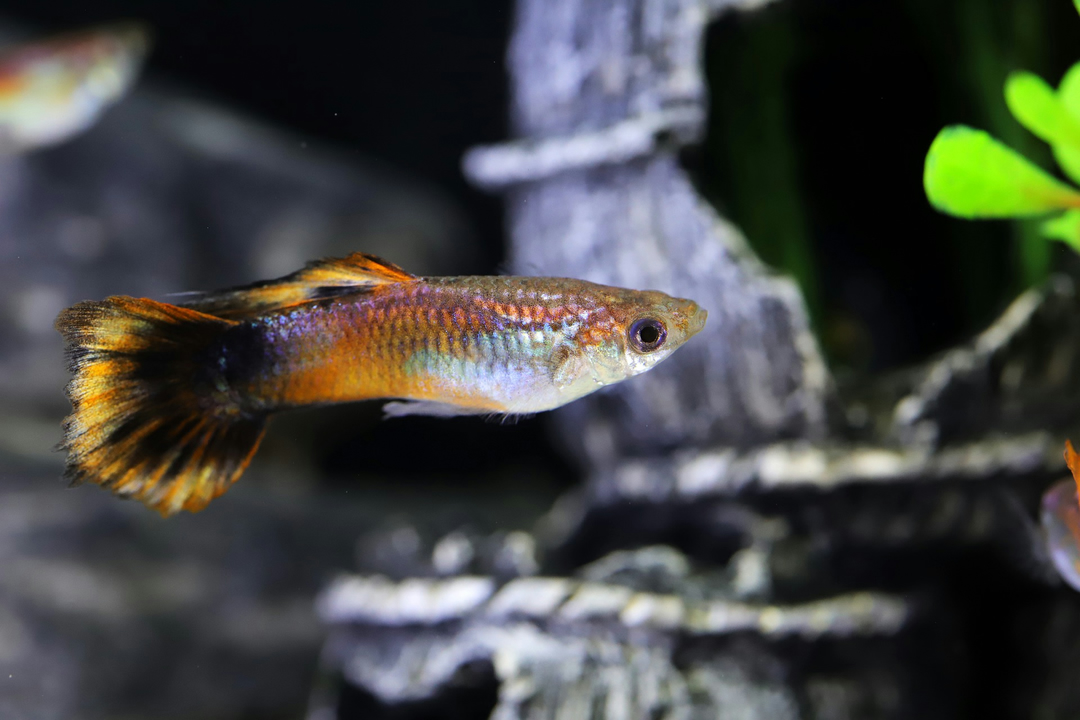 Having any of your fish in bad health can be unsettling. More so, for aquarists with limited experience in treating and keeping ornamental fishes.

So, if you wake up one day to a bloated pet that you are sure is not pregnant, you will obviously be concerned and want to know what is happening.

Bloating in ornamental fish is a non-infectious condition where the abdomen of your aquatic pet abnormally enlarge due to the presence of excessive amounts of clear, watery fluid in the stomach.

The causes of the condition are not precisely established and are quite often considered a symptom than a stand-alone ailment.

However, the most common culprits are bacterial, viral or protozoan infections, incorrect fish care, overfeeding, constipation and even true dropsy and swim bladder disease.

Fish bloat treatment varies depending on the cause, but the use of Epsom salts, medicines, and a change in diet are remedies used quite often.

Bloating in aquarium fish is non-infectious and cannot be transmitted from animal to animal. But as I mentioned above, it can be as a result of many different causes, meaning that though the symptoms (bloating) cannot be passed to other fishes, the underlying cause might be infections and communicable.

For instance, if the bloating is brought about by a bacterial, viral, or protozoan infection, then the condition may spread through your aquariums and cause bloating in .

Feeding your fish foods that cause constipation can also affect and cause bloating in more than one animal.

Looking at other symptoms will help you determine whether the underlying condition is contagious or not.

Is Your Fish Bloated or Pregnant

Apart from determining the causes of bloating in your fish, the other reason you would want to look at all symptoms (distinct to each condition) is to determine whether the swelling is really a bloat or a pregnancy.

Usually, unlike a pregnant fish, a bloated one will have the whole abdomen swollen instead of an area below the stomach that also turns in color.

A bloated fish will also show any or all of the other symptoms:

As for a pregnant fish, other symptoms that you’ll probably see would include:

Having said that, please note that it’s only a few ornamental fish species get pregnant (livebearers). The majority lay eggs that are either brood on rocks, caves, the mother’s mouth, or in a bubble nest.

The most common livebearers kept in fish tanks include mollies, platys, swordtails, and guppies.

Betta fish lay eggs that they blow in bubble nests to hatch, while cichlids and many bottom-dwelling fish lay eggs in caves and rocks.

Goldfish lay eggs as well, but some fancy ballon species do swell up than common goldfish and may be harder to tell whether they are bloated or just ordinarily big.

Other fish, including mollies, also have ballon species that grow well rounded and are hard to tell when bloated or pregnant.

What Causes Bloating in Fish

There are several reasons why your fish might be bloated, with some like constipation simple to resolve, and others such as dropsy pretty tricky to deal with.

That said, please note that some aquarists use bloating and dropsy interchangeably, though the latter is a severe fish condition caused by the build-up of fluids in the body cavity or tissues.

True dropsy (see more insight) manifest as a symptom of an underlying issue such as (but not limited to) bacterial, viral and parasitic infections or liver dysfunction due to one of many reasons.

Usually fatal to fish, dropsy is characterized by a swelling of your fish’s abdomen, sometimes causing the scales to stick out. Your aquatic friend may also appear listless and lose their appetite. If you suspect your fishes have dropsy, quarantine them immediately and take them to your local vets.PETBARN

Bloating due to constipation or indigestion is quite common in the two most popular species of ornamental fish than others. You’re most likely to encounter this problem when keeping betta and goldfish.

In many cases, constipation is caused by poor diet, though it could also be the result of overfeeding.

Some commercial foods are even made with low-quality ingredients that do not provide your aquatic animals with adequate nutrients and may cause digestive issues.

Feeding aquarium fish large quantities of fish food like beef heat or live foods can also lead to bloating and transfer disease-causing parasites from the eats to your fish.

So, to keep your fish from bloating due to indigestion and constipation, offer them a generous amount of food that has dietary fiber to help their digestive tract perform optimally and healthily expel waste.

Contary to the somewhat off-naming, Malawi bloat does not only affect Lake Malawi cichlids but Victoria and Tanganyika cichlids, all of which come from the East African Great Rift Lakes in Malawi, Tanzania, Kenya, and Uganda.

Malawi bloat is caused by a pathogen with the effects catalyzed by stress, salt, and improper diet, though fish keepers and even experts can’t seem to agree whether the pathogen is a Bacterial or protozoal parasite.

The pathogens reside in the intestines of healthy fishes but only grow to harmful numbers under stressful conditions.

The parasites will cause a blockage in a fishes’ intestinal tract, leading to a loss in appetite.

The parasites will also punch holes in the intestinal wall when in large numbers, causing the fish to bloat and may even cause damage to other organs and lead to death.

Since African Rift Valley Lakes are alkaline and have pretty hard water, adding a combination of dissolved Calcium and Magnesium to your soft water will help mimic your fishes’ natural environment and keep them protected.

Please note that adding salt is not the same ass adding Calcium and Magnesium, which buffers your water hardness. Adding regular salt will only help with your tanks alkalinity.

Instead of regular salt, use specially formulated salts like Seachem cichlids lake salt, which are well balanced to both buffers the alkalinity and salinity of your fish tank.

One last thing to consider is feeding your African cichlids properly, especially species that primarily eat vegetables since they are most prone to get Malawi bloat.

Herbivorous cichlids have long intestinal tracts requiring lengthy periods to digest their food. As such, it’s common for these fishes to develop intestinal problems. The decomposition of improperly digested food or partly excreted waste irritate the intestinal walls, stressing the fish and giving the invasive parasite a foothold: Cichlids Forum

The condition often comes about when a primarily herbivorous cichlid is fed high protein foods such as bloodworms or pellets and flake food with large amounts of fish meal.

Therefore, consider feeding your fish crunchier foods more often and only offer them slimy and soft feeds sparingly. Do not give them frozen or live-foods or even flake-foods high in fish-meal too often.

You can use spirulina flake because of its superior nutritional value and less fish meal. This will also help you avoid too many live or frozen foods since spirulina is rich in proteins.

How to Treat Fish With A Bloated Stomach

As we saw earlier, bloating in aquarium fish is not attributable to a single cause, so careful diagnosis is essential before treatment can begin.

For aquarists with extensive knowledge keeping finnies, a little investigation to establish the cause is fine. But if you are new to the hobby, I recommend you consult a vet immediately.

Still note some conditions will warrant a vet’s advice, regardless of your experience keeping fish.

With that said, bloating due to constipation is not fatal and is pretty easy to resolve.

Usually, the condition is common among herbivorous fish and is treatable by switching to high fiber foods, such as tinned peas.

Epsom salt is a potent remedy as well that can be added into aquarium water at a dose of one teaspoon per 5 gallons of water to relieve affected fish.

To avoid wrongly diagnosing and treating a constipated finny, note that although your pet will be bloated and produce stringy poop when constipated, the scales should not be bristly and pinecone-like; a feature commonly associated with fish dropsy.

For a bloated African cichlid, a more probable cause would be Malawi bloat, and the treatment most recommended treatment is Metronidazole.

It’s also recommended that you add Epsom or Table salt (Sodium Chloride) mixtures to your tank. Both are natural laxatives and should help your bloated fish lose some of the excess water in their body.

Dropsy is usually a symptom of an underlying condition which in most cases is only sufficiently identifiable by a vet.

So if you suspect the bloat in your fish is a result of dropsy, I recommend you have your finny checked by a professional.

Of course, adding water to your aquarium will help, but without proper treatment of the underlying cause, you will remain sickly and may even die.